From NASDAQ and FTSE 250 executive role to sweeping chimneys! 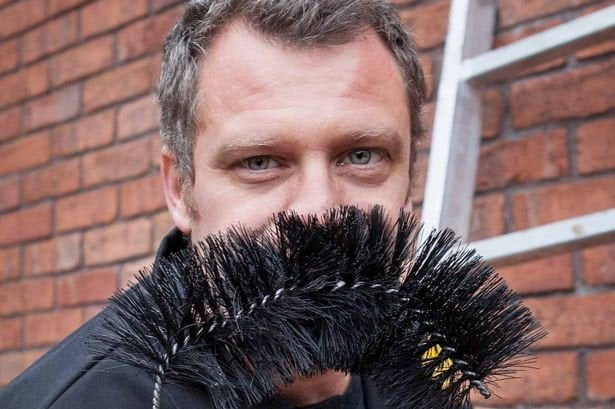 A move from vanity to sanity!

Far too many people moan about their present situation but fail to act to implement the necessary changes. John found his sanity and happiness by forgoing the status symbols associated with a successful career and became a chimney sweep. For both him and for his wife, this was far from expected, but they could not be happier!

If you measure a person purely on their job title, and the car they drive, then John’s career change has been a major regression. But if you measure it on almost any other metric then it’s a resounding success: a move from a vanity job to a sanity job. John has escaped the rat race and his destiny, wealth and happiness lie in his own hands. Read more about his story below.

There is no denying it. Going from successive executive jobs for companies listed on the NASDAQ and FTSE 250, to running your own chimney sweeping business, is a highly unusual and unorthodox journey.  But, John’s story is one which is brave, authentic and refreshingly original, one which is a brilliant example of how we can re-evaluate and successfully reshape our lives to achieve balance and happiness.

“It may not sound like everyone’s dream” admits John “yet my life is now infinitely better, it just depends upon how you define and measure the concept of wealth and success.”

Far too many people moan about their present situation but fail to act to implement the necessary change. If you are investing your valuable time reading this, the chances are that you too are seeking to reshape and realign your life in a similar way.

John found his sanity and happiness by forgoing status symbols and becoming a chimney sweep.  For both him and his wife, this was far from expected, but they could not be happier!  Who knows where your own personal journey might lead.  I have clients who have transformed themselves from optometrists to vicars, retail specialists to philosophers and housewives to highly successful business women, but you will never find out who or what you might become, or find a happier more fulfilling life – unless you take action!

John’s Career Journey: From A to B to FREE!

As a founder member of the Starbucks UK management team, John was responsibly for carrying out a massive store expansion programme which began in 1998. Over an 11 year period, he was personally responsible for opening 120 new outlets as the firm went from 47 coffee shops to over 700. This role was very demanding, but he was young, had lots of time, few commitments and he was happy to give it his all.

However, expansion cannot go on forever and John was made redundant due to urgent cost cutting at the height of the recession when the store opening programme was mothballed. He was treated well and received a decent severance package. In fact when talking about Starbucks and his experiences, John’s tone and body language betray a justifiable pride in his achievements and a continuing fondness for the company in which tellingly, he still owns shares. This happy nostalgia quickly evaporates as his thoughts turn to memories of his subsequent employed work, in particular his final executive post at a national brewery and pub chain which was clearly a dark time in his life.

John didn’t buy into the corporate culture which he describes as “Foolishly obsessed with the short-term share price, rather than the bigger picture and the long-term health of the business and its products and personnel.”

He hated the corporate B.S. and had serious moral concerns about some aspects of what he was expected to do in his day to day work which consisted of driving in excess of 800 miles a week and receiving urgent phone calls at unsocial-able hours. When this happened John was expected to drop everything and jump into the car to spend as long as necessary to troubleshoot the problem.

Despite working his socks off, he never received recognition, reward or time off in lieu for working way beyond his contractual obligations.  He now also had a wife and 2 young daughters but little quality time to truly enjoy a normal family life.

“The catalyst for change” he says “was getting fed up of hearing myself moan.  I thought to myself that if I felt that way about myself……god help my friends and family!  I hardly got to see them and when I did, I was tired, stressed and totally miserable to be around.”

Something clearly had to give!

Recognition of a need for change is the crucial starting point, but how and where do you begin the process of getting yourself out of a rut?

For John it began with a heart to heart with his wife.  He felt immeasurably better once he had told her how he was desperate to break away from the miserable corporate world he found himself trapped in. She was surprisingly receptive and supportive to his radical thinking.
The family had saved John’s redundancy pay from Starbucks and his wife even suggested that he quit his job immediately and use this to live off until he found his new calling. However John was unwilling to part with his savings so easily so he stuck with his job until he had alternative plans in place.

An interesting and common side effect of relief and emancipation is something I observe from people in a difficult present reality, but who are determined to perform actions to change things. During John’s initial research phase into alternative career paths, things became more bearable at his current job. Whilst his day to day activities stayed the same, his mind-set was altered and he felt empowered by the hope of a brighter future somewhere else, he began to wrestle control back from his employers.

The job was no longer everything.

He no longer lived in fear.

John began to speak his mind to his bosses and began to say no to some of the non-contractual unpaid hours. Whilst this was not a good long-term ‘employee career strategy’ and he understood that it might not be tolerated for long, it brought him more time to follow his new passion of making a better future for himself – whilst still being paid.

Long after the children had gone to bed, John and his wife spent all of their available spare time reading books and trawling the internet to find new alternative career paths. As John has no suppressed vocational desires, they started out with an almost totally blank canvas – one of the hardest places to begin. The initial foundation they created was a simple list of ‘wants’ and ‘don’t wants,’ overtime this evolved into a list of non-negotiable requirements John wanted;

Having got used to a decent remuneration package, he needed a career path that had the potential to provide a similar standard of living, but he was prepared to fall back on his redundancy savings and earn a lower amount in the short-term (12 to 18 months.) The results from his research revealed that John needed to work for himself, he needed to start his own business or buy an existing business so he could be his own boss.

As this evolved, John began a more detailed review of his career experiences which gave him a clearer picture of what he was good and bad at as well as what he enjoyed doing and what he hated. He concluded that;

After 3 months this evaluation process had begun to lead him down the franchised business route.  He liked the idea of having a proven system to follow, but the satisfaction of creating and building the business from the ground up – just like he had done when employed at Starbucks. Only this time the business would be wholly owned by him. Having managed the problems of employing staff, he was also increasingly drawn to a more simple business where he was both the brains and the brawn and did not have to rely on anyone else. This further narrowed down his options.

John can’t quite put his finger on what drew him to choosing a chimney sweeping franchise. He admits that it is totally random, but it was something that kept popping up in his research and it ticked all of the boxes for his non-negotiables, wants and needs.

In my own experience of observing, interviewing and working with people making significant life changing decisions there are certain common patterns. Firstly the feeling of liberation and freedom having made that initial decision to seek change. Secondly, having honed down the options and decided upon the new alternative path, there is a tendency to delay or put off properly committing to the solution. Finally there is almost always a final trigger that pushes the person to fully commit to the new alternative path. This pattern was one which John followed.

The catalyst for him was “an hour and a half circular conversation with my boss about setting targets that I felt were delusional. He was too far removed from the coal face and was happy to just follow the corporate direction rather than face reality.  As ever it would be me left to pick up the pieces when staff called in sick with stress.  I came home fuming and vowed that this was the final straw.  That evening I took the plunge towards proper engagement and spoke to the franchiser for the first time….”

John has been successfully running his own business since August 2012. He executed the start-up plan flawlessly and won the franchisee of the year award for his organisation in his second year of trading. The award was based on financial performance of the business, delivery of service of the brand to the customer and positive input to the overall franchise group.

His remuneration is now much the same as of his previous job but he works significantly less hours. His quality of life is  “immeasurably better” Although he still gets the odd out of hours call, these days he doesn’t mind too much as they come from customers the value of his time and are prepared to pay for it.

He manages his own diary and is very much his own man.  He loves being his own boss and the fact that the buck stops with him.  He is responsible for whether he is having a good day, month or year. He enjoys the day to day interactions with his customers – who come from a broad mix of backgrounds, including high flyers and other business owners who I suspect are frequently surprised by his capacity to talk about and even provide advice on their businesses at a very high level!  In a similar vein, he also relishes networking with other local business owners and helping to shape and have an influence on the future direction and strategy of the parent franchise brand.

John sees his children and wife a lot more and by his own admission he is lesson grumpy! With more time to spend on things of his own choosing, he is now a school governor at his daughters’ school. Something that would have been unthinkable a few years ago.

If you are shallow enough to measure a person purely on their job title, and the car they drive then I concede that John’s career change has been a major regression.  But if you measure it on almost any other metric then this cannot be viewed as anything other than a resounding success; A move from vanity job to sanity job.  John has escaped the rat race and his destiny, wealth and happiness lies in his own hands.

Many congratulations John on becoming a successful Rock Star Retiree!